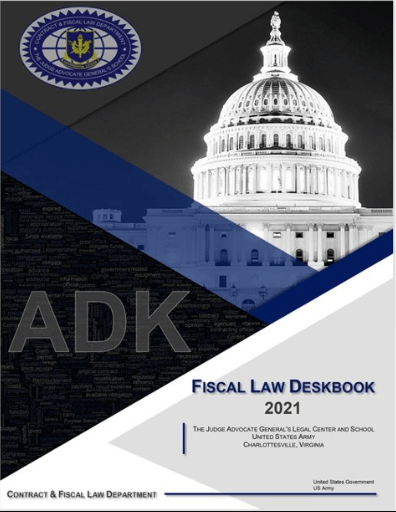 Fiscal Law Deskbook 2021: This book is composed by United States Government US Army. You can download it freely in pdf format.  For many years after the adoption of the Constitution, the executive departments exercised little fiscal control over the funds allocated to them. During these years, departments commonly committed funds prior to appropriations, pooled funds and used funds for purposes other than those for which they were appropriated, and committed or spent funds early in the fiscal year and then sought deficiency appropriations to continue operations.

Congress passed the Anti-Deficiency Act (ADA) to curb fiscal abuses that often created “coercive deficiencies” that required supplemental appropriations. The Law actually consists of several statutes that require administrative and criminal sanctions for the illegal use of allocated funds. See 31 U.S.C. §§ 1341, 1342, 1350, 1351, and 1511-1519.

The period of time in which budget authority is available for the original obligation. Department of Defense Financial Management Regulation 7000.14-R, Glossary, p. G23 [hereinafter DoD FMR]. Most allowances are available by obligation for a limited period of time, for example, one fiscal year for O&M allowances. If the activities do not obligate the funds during the availability period, the funds expire and are generally not available for new obligations thereafter.

According to United States Government US Army, an obligation is an act that legally binds the government to make a payment. Liabilities are amounts that represent orders placed, contracts awarded, services received, and similar transactions during an accounting period that will require payment during the same period or in a future period. This includes payments for which no obligations have been previously recorded and adjustments for differences between previously recorded obligations and actual payments to settle those obligations. The amount of the obligations contracted is segregated into undelivered orders and accrued paid or unpaid expenses. For purposes of matching a disbursement to its corresponding obligation, the term obligation refers to each separate obligation amount identified by a separate line item. DoD FMR, Glossary, p. G-21.
This work will begin with the basics of PTA, explore areas ranging from operations financing authority to continuing resolution authority, as well as provide practical information for areas such as conducting tax law legal research.