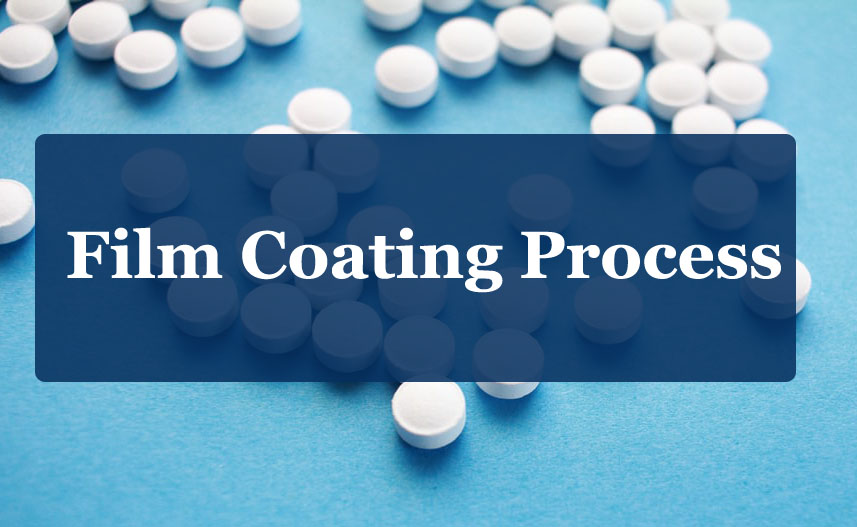 The film coating process involves the deposition of a thin layer of film-forming polymer on a product substrate. The process can be carried out using conventional baking equipment, but today more sophisticated equipment is used to achieve efficient drying, a high degree of automation, and a coating time.

The coating formulation contains a polymer solubilized in a suitable solvent along with other additives such as plasticizers and pigments. This solution is sprayed onto a bed of rotating or fluidized tablets. The drying conditions cause the removal of the solvent, leaving a thin deposit of coating material around each core of the tablet.

There are a number of variables that need to be controlled in a process and we will understand how these variables are crucial to the film coating process. We will also study various types of equipment, which are available for film coating.
Basic requirements of film coating.

Now we discuss step by step Film Coating Process in Pharmaceuticals and how to perform these steps.

The spray rate in a coating process can be easily controlled by keeping the coating suspension in equilibrium in order to calculate the spray rate per minute. It is very important to monitor at least the first 3-5 batches and derive the rpm from a peristaltic pump, which provides the required spray rate.

During film coating, the tray load should be optimal or maximum. If the load on the coating pan is partial, a large amount of intake air can go directly to the exhaust duct and a lot of energy is wasted. Due to the partial load, the exhaust plenum is not completely covered. This reduces the drying efficiency of the coating pan. The partial load process is more compared to full load. The mixing efficiency of the coating pan also decreases at part load and requires more pan rpm than is normally used. This is most critical in functional coatings such as enteric coating where edge wear or damage can result in product failure in the disintegration test.

To solve the problems associated with partial loading, many machine builders now use the multi-plate approach. Therefore, with a coating tray, different drum sizes are provided to accommodate various batch sizes.

In a coating pan where multiple guns are used, it is very important to set the guns correctly. Therefore, the distance between the gun and the gun and the distance between the gun and the bed is very important and must be set correctly to obtain the required spray width. If the guns are kept too close and the spray width is narrow uneven coating results. Requires more coating material to obtain a uniform coating. If the guns are too wide and the spray widths are wide, they overlap each other. In this situation, there is localized over-wetting in the spray overlap zone. Some spray also goes to the tray wall, door, and baffles. This also wastes coating material. They can be chopped and glued. In an ideal configuration, the spray pattern is on the surface of the tablet and also covers almost the entire bed of the tablet.

Gun validation is very important and should be done before you start spraying. It is important to configure a weapon so that there is minimal variation between weapons. At first the spray rate should be recorded rather than in terms of ml or weight for each gun and guns should be adjusted if there is more than 10% variation.

During the film coating process, the container should be operated under negative pressure and the positive process should be avoided. Every machine builder provides a coating pan that has an exhaust more than 1.5 times that of the inlet air blower.

If the coating pan is operated under high negative pressure, there is the possibility that some spray will enter the exhaust directly. Because of this, more coating material will be required to achieve uniformity. As we open the coating tray door several times in the process, due to the high negative, the air from the process room which is 25 ° C enters the coating tray and mixes with hot air (50- 55 ° C) and therefore reducing drying. coating pan efficiency. It is also very difficult to maintain the temperature of the bed.

Below is the list of process parameters that should be monitored throughout the coating process.

Immediate release film coatings also known as non-functional or conventional film coatings are typically reserved for situations where it is necessary to improve product appearance, ease of ingestion, product stability, and taste masking. The coatings do not have a measurable effect on the biopharmaceutical properties of the coated dosage forms.