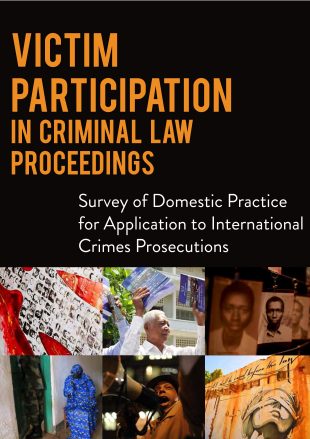 The book Victim Participation in Criminal Law Proceedings is written by Redress. The victims of international crimes are at the very center of the fight against impunity for those crimes. States and criminal justice actors must be aware of what victims’ rights are and how they can be respected in a meaningful and effective way. This includes the rights of victims to be treated with compassion, dignity, and respect, to have access to justice, and to obtain reparation. Victims have the right to be protected from reprisals, to receive information on the progress of cases that concern them, and to participate in the legal process.

There is international consensus that certain crimes, including genocide, crimes against humanity, war crimes, enforced disappearances, and torture – constitute offenses under international law (hereinafter “international crimes”), and that the perpetrators of these crimes must be held accountable, wherever they are committed.15 The last thirty years have seen increasing attention being paid to prosecuting those who bear the greatest responsibility for these crimes, as required by both customary international law and treaties to which most states are a party. High-profile prosecutions have been carried out at the international level – through special international tribunals established by the Organization of the United Nations (UN), and through the first trials carried out by the Criminal Court Court (ICC).

The last thirty years have seen significant progress in strengthening systems to investigate, prosecute and punish those accused of crimes under international law including genocide, crimes against humanity, war crimes, torture, and disappearance. Efforts at the international level, including through the International Criminal Court – are increasingly being paired with investigations and prosecutions at the domestic level. Progressively, more trials for crimes under international law are taking place through national criminal proceedings. These include trials that follow transition periods and through specially constituted chambers or tribunals during periods of mass atrocities.