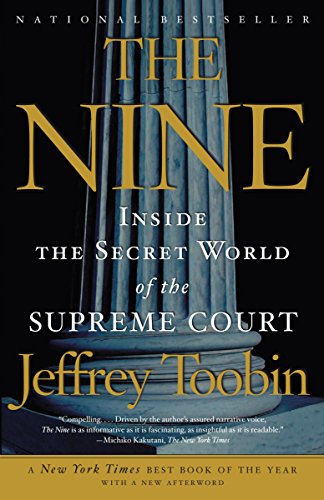 The book The Nine: Inside the Secret World of the Supreme is written by Jeffrey Toobin. Architect Cass Gilbert had grand ambitions for his design of a new home for the Supreme Court, which he called “the greatest court in the world, one of the three great elements of our national government.” Gilbert knew that access to the Courthouse, as much as the structure itself, would define the experience of the building, but the site presented a challenge. Washington’s other exalted buildings, the Capitol, the Washington Monument, and the Lincoln Memorial, inspired awe with their professional approaches. But in 1928, Congress had designated a narrow, asymmetrical lot for the Court, wedged tightly between the Capitol and the Library of Congress. How might Gilbert convey to visitors the magnitude and importance of the judicial process that takes place within the Court’s walls?

The answer, he decided, stepped. Gilbert pushed back the wings of the building so that the public face of the building was a portico with a massive, imposing staircase. Visitors would not have to walk a great distance to enter, but few would forget the experience of climbing those forty-four steps to the double row of eight massive columns that support the roof. Climbing the stairs would be the central symbolic experience of the Supreme Court, a physical manifestation of the American march toward justice. The stairs separated the Court from the everyday world—and especially from the mundane concerns of politicians on Capitol Hill—and announced that the judges would literally operate on a higher plane.

Jeffrey Toobin is a staff writer for The New Yorker, a senior legal analyst for CNN, and the author of such best-selling books as Too Close to Call: The Thirty-Six-Day Battle to Decide the 2000 Election, A Vast Conspiracy: The Real Story of the Sex Scandal that almost brought down a president and The Run of His Life: The People v. O.J. Simpson. He lives with his family in New York City.

Overview of The Nine: Inside the Secret World of the Supreme

Acclaimed journalist Jeffrey Toobin takes us into the chambers of our country’s most important and secret legal body, the Supreme Court, and reveals the complex dynamics among the nine people who decide the country’s laws. An institution in a time of transition, the Court now stands at a turning point, with major changes ahead on issues such as abortion, civil rights, and church-state relations. Based on exclusive interviews with the justices and with a keen sense of the Court’s history and the trajectory of its future, Jeffrey Toobin creates in The Nine a compelling story of one of the most important forces in American life today.