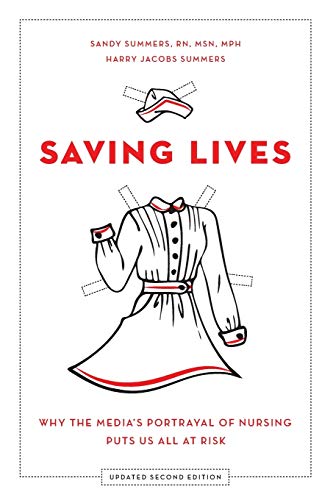 The book Saving Lives: Why the Media’s Portrayal of Nursing Puts Us All at Risk is written by Sandy Summers, and Harry Jacobs Summers. Nurses save lives every day. But the media generally ignores their vital role in health care. That contributes to a lack of respect and resources for the profession, putting many lives at risk. In 2005, US Army Sergeant Tony Wood was traveling in a Humvee in Iraq. A roadside bomb exploded. The metal tore Wood’s internal organs. A month later he woke up at Walter Reed Army Medical Center in Washington, DC. Wood’s story was featured in an August 2008 New York Times article by Lizette Alvarez about traumatic brain injuries in combat veterans. Once Wood arrived at the hospital, expert nurses led the 24/7 effort that helped him survive, as they do with any patient whose injuries are so severe. But this is how Álvarez summed up that effort: “Doctors healed most of his physical injuries for five months.”
In a similar incident, a roadside bomb exploded near a Humvee in which US Army Sergeant Nick Paupore was traveling in the city of Kirkuk. Paupore lost a leg and a huge amount of blood, but he also survived. In March 2008, the CNN website published a story by Saundra Young about a Walter Reed neurologist’s use of a promising new mirror therapy to help amputees like Paupore cope with phantom limb pain. Once again, the nurses undoubtedly provided the vast majority of the care that helped Paupore live. But in describing the care Paupore received in Germany on the way to Walter Reed, the article reported simply that “doctors fought to save his life.

Sandy Jacobs Summers has served as Executive Director of Truth About Nursing since its founding, carrying on work that began in 2001 with fellow nursing graduate students at Johns Hopkins University. He frequently speaks to the media and at conferences. In 2002, Summers earned a master’s degree in public health and community health nursing from Johns Hopkins. He has a BSN degree from Southern Connecticut State University. Prior to her graduate work, Summers practiced nursing for fifteen years in the emergency departments and intensive care units of major US trauma centers, including public hospitals in San Francisco, New Orleans, and Washington, DC. In the mid-1990s, she worked in Phnom Penh, Cambodia, where she taught nursing faculty at the Central School of Nursing. She also practiced critical care nursing for a year at a hospital on St. Thomas in the US Virgin Islands.

Harry Jacobs Summers has been a senior advisor to Truth About Nursing since its founding, and also served as the group’s lead writer. He has a bachelor’s degree from Columbia University and a law degree from Georgetown University. Summers studied for a year on a Fulbright scholarship in New Zealand. He also taught business law to government officials for three years in Phnom Penh, Cambodia. Since 1998 he has been a trial attorney at the Federal Election Commission in Washington, DC. Sandy and Harry have co-authored nursing and media articles for major nursing journals, textbooks, and leading publications. They live in Baltimore with their two children.

Overview of Saving Lives: Why the Media’s Portrayal of Nursing Puts Us All at Risk

For millions of people around the world, nurses are the difference between life and death, self-reliance and dependency, and hope and despair. But a lack of understanding of what nurses actually do, perpetuated by popular media’s portrayal of nurses as simplistic archetypes, has devalued the profession and contributed to a global shortage that constitutes a public health crisis. Today, the thin ranks of the nursing workforce contribute to countless preventable deaths.

This fully updated and expanded edition of Saving Lives highlights the essential roles nurses play in contemporary health care and how this role is marginalized by contemporary culture. Through engaging prose and examples are drawn from television, advertising, and news coverage, the authors detail the role of the media in reinforcing stereotypes that fuel the nursing shortage and devalue a highly educated sector of the contemporary workforce. Perhaps most importantly, the authors provide a wealth of insights to help reinvigorate the field of nursing and correct this imbalance.

As American health care undergoes its biggest overhaul in decades, the practical role of nurses, as autonomous and highly skilled professionals, has never been more important. Consequently, Saving Lives addresses both the sources and the prescription of misperceptions surrounding contemporary nursing.