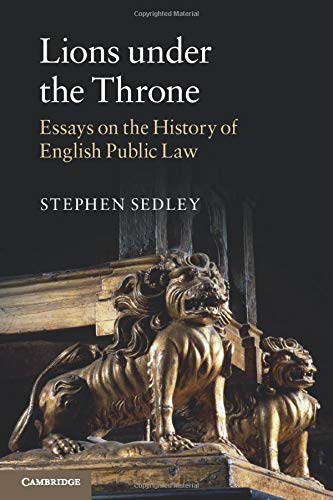 The book Lions under the Throne: Essays on the History of English Public Law is written by Stephen Sedley. By 2011, when I retired from the Court of Appeals, I had spent eighteen years on the court and previously twenty-eight years on the Bar. During those years, I watched public law grow from a subject not even taught in law schools except as a footnote to constitutional law, to an important area of ​​legal practice and constitutional development. I, too, had been lucky enough to play a minor part in this metamorphosis.
The offer, after my retirement, of a post as Visiting Professor of Law at Oxford University gave me the opportunity and encouragement to confront the lack of curiosity I had encountered everywhere in my profession, as well as to satisfy my own Curiosity, about how the public law of England and Wales (and in practice Northern Ireland too) has come to be what it is. At my age, there was no way to catch up on what should have been the research of a lifetime. Working on these essays, while it has been an education for me, has repeatedly reminded me how limited my knowledge is, for while practitioners in a common law system sometimes have to deploy historical material, its use tends to be oriented towards objectives and lacking context. The book, therefore, is primarily for judges, practitioners, and students, although I hope academic lawyers, legal historians, and political scientists will find food for thought as well.

Introduction
Part I: Histories
1 Lions in Winter: Public Law in the Twentieth Century
2 The Dark Satanic Mills: The Victorian State
3 New Corn from Old Fields: The Hanoverian Harvest
4 Parchment in the Fire: Public Law in the Interregnum
5 The Future of Public Law
Part II: Themes
6 The Royal Prerogative
7 The Sovereignty of Parliament and the Abuse of Power
8 The Right to be Heard
9 The Separation of Powers
10 Public Law and Human Rights
11 The State and the Law
12 Standing and “Sitting”
13 Law without Courts: The Tribunal System
14 The Rule of Law

Overview of Lions under the Throne: Essays on the History of English Public Law

Francis Bacon wrote in 1625 that judges must be lions, but lions under the throne. From that day until today, the tension within the state between the parliamentary, judicial, and executive power has remained unresolved. Lions under the Throne is the first systematic account of the origins and development of the great body of public law by which the state is governed, both institutionally and in relation to the individual.