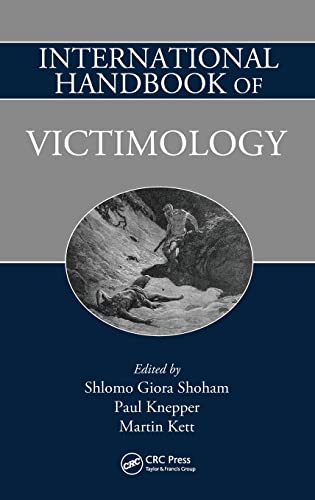 The book International Handbook of Victimology is written by Shlomo Giora Shoham, Paul Knepper, Martin Kett.  In 1973, the First International Symposium on Victimology met in Jerusalem. The symposium was held under the auspices of the International Society for Criminology with support from the Hebrew University of Jerusalem, Tel Aviv University, and Bar Ilan University. The symposium brought together scholars from various fields from around the world; They presented papers on theoretical issues in victimology, response to crime, victims and criminal justice, and victimization processes. This work appeared in a five-volume collection of articles entitled Victimology: A New Focus [1973], edited by Israel Drapkin and Emilio Viano, and has for some years represented the state of international knowledge in victimology.
After 30 years, some topics are still important areas of interest, and new topics have emerged. Conceptions of victimization, secondary victimization, hidden victimization, and social services for victims have continued to be important topics for research and theory. New themes have emerged. Restorative justice has had a major influence on victimology theory, research, and policy. Government-sponsored crime victimization surveys, which began in the early 1970s, now represent a valuable source of information on victimization processes. Compensation and restitution schemes have operated for decades in a number of countries, and victims’ rights have become law. To reflect these essential and emerging issues, we have produced the International Handbook on Victimology.

Section I
THEORETICAL AND HISTORICAL FRAMEWORKS
1 Becoming a Victim
2 The Meaning of Justice for Victims
3 The Evolution of a Young, Promising Discipline: Sixty Years of Victimology, a Retrospective and Prospective Look
4 History and a Theoretical Structure of Victimology

Section VI
RESPONSES TO CRIMINAL VICTIMIZATION
13 Victims and Criminal Justice in Europe
14 Lobbying for Rights: Crime Victims in Israel
15 Victim Services in the United States
16 Fear of Crime in the Republic of Ireland: Understanding Its Origins and Consequences

Section V
RESTORATIVE JUSTICE
17 When Prisoners Leave: Victim–Offender Relationships in a Transitions Context
18 Death of a Metaphor? Healing Victims and Restorative Justice
19 The Healing Nature of Apology and Its Contribution toward Emotional Reparation and Closure in Restorative Justice Encounters
20 Exploring the Effects of Restorative Justice on Crime Victims for Victims of Conflict in Transitional Societies

Section I V
VICTIMS AND SOCIAL DIVISIONS
21 The Hidden Violent Victimization of Women
22 Images of Criminality, Victimization, and Disability
23 The Psychological Impact of Victimization: Mental Health Outcomes and Psychological, Legal, and Restorative Interventions
24 Culture and Wife Abuse: An Overview of Theory, Research, and Practice
25 The Idea of the Crime Victim as a Trojan Horse in the Swedish Social Services Act

Shlomo G. Shoham is a Professor of Law and Interdisciplinary Professor at Tel Aviv University School of Law and is a world-renowned criminologist who has published more than 100 books and over 1,000 articles on crime, deviance, philosophy, religion, psychology, and human personality. Over the years, he has developed his groundbreaking theory of personality, a highly regarded new theory of personality development. In 2003, Professor Shoham received the Israel Prize for research in criminology. Previously, he was awarded the Sellin-Glueck Award, the highest honor in American criminology, and recently the prestigious Emet Award. He received a decoration from the Prime Minister of France. Professor Shoham has lectured around the world and has been a resident at Oxford, Harvard, and the Sorbonne universities. Paul Knepper is a Senior Lecturer in the Department of Sociological Studies at the University of Sheffield and Visiting Lecturer at the Institute of Criminology at the University of Malta. His research has explored the sociopolitical definitions of race, the conceptual foundations of crime prevention, and the historical origins of contemporary responses to crime. Martin Kett is a technical writer and freelance translator. He received a bachelor’s degree in mathematics and statistics from Bar-Ilan University, Israel.

Overview of International Handbook of Victimology

In the nearly four decades since the First International Symposium on Victimology convened in Jerusalem in 1973, some concepts and themes have continued to feature prominently in the literature, while new ones have also emerged. Exploring enduring themes such as conceptions of victimization, secondary and hidden victimization, and social services for victims alongside more recent issues, the International Handbook of Victimology offers an interdisciplinary study of the topic from a wide range of professionals at the forefront of victimology. victimology research.

Forty experts from top research facilities and universities around the world provide insight into the longstanding traditional issues surrounding the field of victimology and explore newer topics such as restorative justice, the use of crime victimization surveys sponsored by the government, compensation and restitution schemes, and victims. ‘Rights legislation. The second in a trilogy of volumes, this manual examines victimology from the perspectives of criminology, sociology, psychology, law, and philosophy.