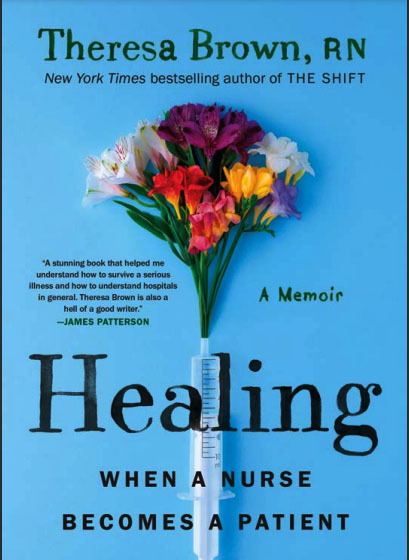 Theresa Brown – Healing When a Nurse Becomes a Patient 2022 is available now on this page.  Despite her training and years of experience as an oncology and palliative care nurse, Brown finds it difficult to navigate the medical maze from the other side of the bed. Why is she often left in the dark about procedures and treatments? Why is she expected to investigate her own best treatment options? Why is there so much bureaucracy? She is sometimes angry with herself for not speaking up and asking for what she needs, but she knows that being a “difficult” patient could mean that she receives worse care. Healing: When a Nurse Becomes a Patient PDF FREE 2022 Download with reliable link at the end of this post.

Of the nearly four million women in this country living with breast cancer, many have had, like Brown, a treatable form of the disease. Both unnerving and extremely relatable, her experience shows us how our for-profit health care industry “heals” us, but at the same time leaves many of us feeling alienated and neglected. As he did so brilliantly in his New York Times bestseller The Shift, Brown conveys the unforgettable details of his daily life: the needles, the chemotherapy drugs, the rubber gloves, the bureaucratic frustrations, but this time from his new position as a patient. , reviewing some of her own cases and considering what she did not know then about the distorting effects of fear and the healing virtues of compassion. “People failed me when I was a patient and I failed patients when I worked as a nurse. Now I see it,” she writes. Check Nursing Books free here

FOREWORD of Healing When a Nurse Becomes a Patient

According to the author:
I was reading Roxane Gay’s Bad Feminist the day I went in for my scan. The inside cover of the book is neon pink, not the youthful pink of Disney princesses and bubblegum, but a smart, flickering pink. The color of a bad, as in badass, feminist: the kind of person who reads Bad Feminist while she’s waiting for a mammogram. It was a follow up. I had mentioned it to my husband, Arthur, who was out of town, but no one else. They always called me back. Well, not always, but often, and I sweated the “need for further evaluation” enough times that I convinced myself that there is no value in being anxious in advance. I had a mammogram and an ultrasound: only on the right side.

I quietly waited in the hallway between the two scans, and then waited in the ultrasound room after the tech left and before the radiologist came in. I could have wondered why the technician left, but instead I read my neon pink book, word for word, not knowing what I was reading. A questionable scan warrants an on-the-spot reading by an on-site radiologist, who came and redone the ultrasound. It took a long time, which pissed me off, and then once I considered why it could be so slow, he scared me. He finally he said, “I see a mass.” a mass. I saw her in profile, gray hair brushed back from her face, her eyes focused on the screen. It might seem like he could have said more, but those four words were already too many. I didn’t move or speak or sit up, but I began to cry, slowly. Tears welled up in each eye and trickled down the sides of my face as I lay silently on the exam table.

I am a former oncology nurse and hospice nurse. I knew the importance of letting the doctor finish the scan, that panicking wouldn’t help me or her while he took final steps or did what he had to do. I assumed that I had enough knowledge about cancer because I knew about specific cancers, that I understood the feelings of cancer patients because I had cared for so many, that I had faced mortality because several patients had died. But I was wrong. Other people’s mortality is categorically different from your own. Real mortality, that is, mine, had never, before this moment, seemed real. “Could it be a fibroid adenoma?” I released. I’ve had them before and they are not cancerous.
“No,” she said, gently shaking her head. “This looks ugly.” She left, and as soon as I heard the door latch, I sat up and sobbed, my whole body shaking. Fear had found me and everything seemed backwards. My nurse-me had abandoned me and I had become a patient. Not just any kind of patient, either, but a cancer patient.

The ultrasound technician came back into the room so quietly I didn’t hear her, but suddenly her arms were around me. He put her arms around me, a stranger, and said, “They can cure this.” But that’s what I did: comfort strangers. Not even a day had passed since I started my tests. It was still sunny and a bit colder than normal for September, but it had changed. The nurse was lost in the background, the patient flailing at the top. He was terrified, sad and angry. He was scared, helpless and enraged. He was scared, bereft and angry. And that was just the beginning.

Theresa Brown, RN, nurse and author of the New York Times bestseller The Shift, is a New York Times contributor. Her writing appears on CNN.com and in the American Journal of Nursing, the Journal of the American Medical Association, and the Pittsburgh Post-Gazette. She has been a guest on MSNBC Live and NPR’s Fresh Air. Her first book was Critical Care, and during what she calls her past life, she received a Ph.D. in English from the University of Chicago. She lectures nationally and internationally on topics related to nursing, health care, and end of life.

Healing: When a Nurse Becomes a Patient has the following topics

If it does not work then try Download server 2.