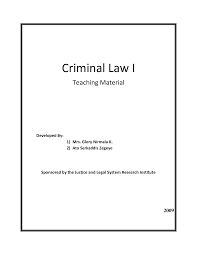 The book Criminal Law is written by Mrs. Glory Nirmala K., Ato Serkaddis Zegeye. Criminal law is the body of law that defines crimes against the community in general, regulates how suspects are investigated, charged, and tried, and establishes punishments for convicted criminals. The term “criminal law” is often used to include everything that is involved in ̳the administration of criminal justice in the broader sense. Criminal law identifies, defines, and declares the behaviors that it intends to prevent and prescribes the corresponding penalties also for them. the law of crimes has always been one of the most attractive branches of Jurisprudence, although it is true that both crime and the criminal are regarded with the greatest hatred by all sectors of the population in society. In fact, the law of crimes has been as old as the civilization itself. Wherever people organized themselves into groups or associations the need for some sort of rules to regulate the behavior of members of the inter is group has been felt, and where there were rules of society, breaches were inevitable. And realized there was a need to devise some ways and means to curb such tendencies in society that lead to violation of its rules in any organized society.

This should briefly explain the unit contents. Certain acts are prohibited under the penalty of punishment. When one person injured another and the injury could be adequately compensated for the value of money, the “offender” was obliged to pay damages or compensation to the “wronged” individual. But in certain cases, in addition to the obligation to pay compensation the state imposes certain penalties on the wrongdoer with the object of preserving peace in society and promoting good behavior towards each other and the community at large. To prevent a crime from occurring, or To deal effectively with a crime once it has occurred, we need to know what the is crime and what are the related legal ramifications. The study of criminal law. aims to have an understanding of these concepts.

There are no easy explanations for the phenomena collectively called crime. Crime is a misleading concept because it covers an enormous variety of human behavior. Crime may be associated in the public mind with pickpocketing, robbery, home invasions, and riots, but crime is also a businessman offering bribes to win a contract with the city. He is also a syndicate-controlled loan shark taking over a business from a businessman who was unable to meet the exorbitant payment schedule. It’s quiet a student suddenly takes a rifle to the top of a university tower and starts shooting at those below. It is often wrongly thought that crime is the vice of a few.