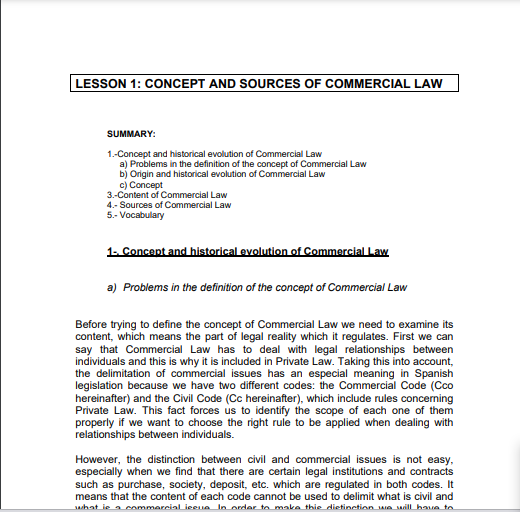 The Concept and Sources of Commercial Law: This is written by Universidad Politécnica de Cartagena which you can download freely in pdf format.  Before attempting to define the concept of Commercial Law, we must examine its content, that is, the part of the legal reality that it regulates. In the first place we can say that Commercial Law has to do with legal relations between individuals and that is why it is included in Private Law. Bearing this in mind, the delimitation of commercial matters has a special meaning in Spanish legislation because we have two different codes: the Commercial Code (Cco from now on) and the Civil Code (Cc from now on), which include rules related to the Private right. This fact forces us to properly identify the scope of each of them if we want to choose the appropriate rule to apply when it comes to relationships between individuals.

However, the distinction between civil and commercial issues is not easy, especially when we find that there are certain legal institutions and contracts such as the sale, partnership, deposit, etc. that are regulated in both codes. It means that the content of each code cannot be used to delimit what is civil and what is commercial. To make this distinction we will have to study the historical evolution of Commercial Law to discover what part of the legal reality it currently regulates.

Overview of Concept and Sources of Commercial Law Pdf Free

According to Universidad Politécnica de Cartagena, today we must bear in mind that commercial issues are not only regulated by our Cco. This was written in 1885 and reflected the economic situation of those years. But many things have changed in the development of commercial activities since 1885. New contracts, institutions have appeared and the Cco has not been modified to introduce this new economic reality. These new contracts and institutions have been regulated by special laws, laws that have emptied the content of the Cco to the extent that today our code only regulates certain commercial issues related to the concept of merchant, their main rights, obligations and responsibilities. and some contracts.

Commercial Law has a clear customary origin. As we have stated, it was created by merchants who needed new rules and institutions to meet the special requirements of their profession. Taking this into account, a use or custom, as a source of Commercial Law, can be defined as a commercial practice that needs to be effective, that must be carried out repeatedly and that can be widely considered as binding. The application of a certain custom must be alleged and proven for those who want to use it to solve a case.
Today, uses or customs have many drawbacks when applied as a source of law. They are unwritten rules; they are just business practices that have been carried out by merchants for years and years under the belief that they were mandatory. For this reason, there is great uncertainty around the existence of a use or custom and this is something incompatible with current trade in which legal relations must enter and be resolved very quickly and there is no time to stop and test whether a certain use or custom really exists. Anyway, customs also have advantages. We are talking about rules created by merchants and this fact makes them more adapted to the special requirements of the profession. They are rules created by those who also have to follow them.


Topics of this Edition

The Polytechnic University of Cartagena is the youngest technical university in Spain. This fact contrasts, however, with its long history as a university in the field of engineering and business, since several of its faculties date from the late nineteenth and early twentieth centuries.

The UPCT is located within an urban area where most of its facilities are located in rehabilitated historic buildings, such as the Hospital de la Armada (Spanish: Hospital de Marina) (18th century), the Cuartel General de Antiguones (Spanish: el Cuartel of Antigones) (18th-19th century), the House of Mercy (in Spanish: Casa de Misericordia) (19th century) and the Mariners’ Instruction Barracks (in Spanish: Mariners’ Instruction Barracks) (18th century).
The creation of the Polytechnic School of Cartagena dates back to 1975 and occurs with the integration of studies at the University of Murcia. The objective was to integrate the Higher Technical School of Mining Engineers and the Higher Technical School of Industrial Engineers at the University of Murcia and to be able to add other areas of study to the new Center.