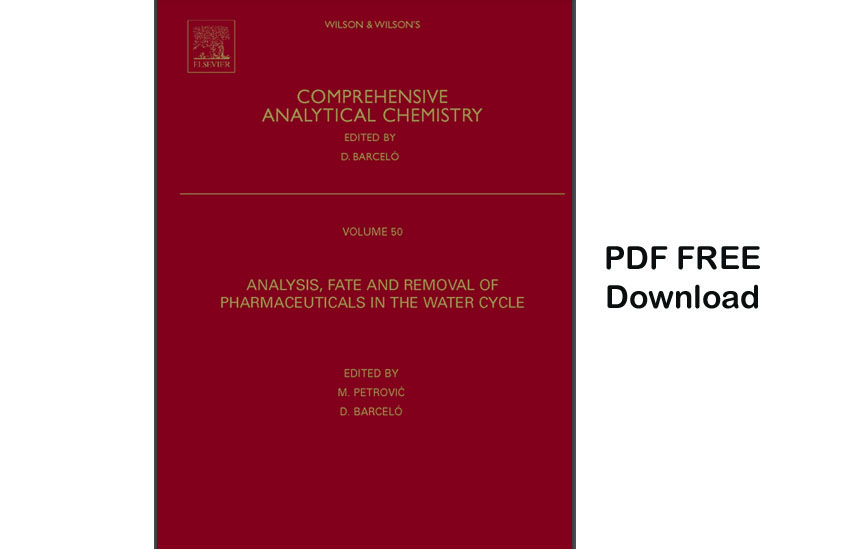 To reach these objectives the book includes a concise and critical compilation of the information published in the last years regarding all analytical aspects of the trace determination of pharmaceutical residues in the environmental samples, including advanced technologies for sample preparation of aqueous and solid samples, clean up protocols and analysis The analytical methodology for the determination of trace pharmaceuticals in complex environmental matrices is still evolving and the number of methods described in the literature has grown considerably. Ten years ago GC/MS with derivatisation was the method of choice due to the possibility to go as low as low nanogram per liter level. Nowadays, LC/MS/MS and hybrid MS systems involving time of flight (TOF) and other analyzers is the method of choice due to its increased availability, high sensitivity and the fact there is no need of derivatisation of the samples, as it is the case in GC/MS. The book is structured with five chapters: The first chapter deals with the general introduction of the problem of pharmaceuticals as environmental contaminants thus indicating their sources and management options.
The second part of the book comprises the largest part of the book and it is devoted to the analysis of pharmaceuticals and consists of 8 sub-chapters dealing with modern analytical techniques for the unequivocal detection of all main classes of pharmaceuticals (antibiotics, anti-inflammatory drugs, b-blockers, lipid regulating agents, sex hormones, X-ray contrast agents, psychiatric drugs) in liquid (wastewater, surface, ground and drinking water) and solid matrices (soil, sediment, sludge). The chapter is mainly devoted to highly sophisticated and established hyphenated mass spectrometric methods such as LC-MS and LC-MS-MS and GC-MS. In addition, sample preparation methods are thoroughly evaluated for all groups of pharmaceuticals including their major metabolites. Finally, one sub-chapter also addresses the application of bioassays and biosensors for the analysis of pharmaceuticals in the environment.
The third chapter gives an overview on occurrence data in all environmental compartments including sewage sludge, as well as transformation processes of pharmaceuticals in the environment, including photolysis and other processes and a final subchapter on an overview of toxicological data. The fourth chapter deals with the removal of pharmaceuticals in biotic and abiotic removal mechanisms. Of the treatment techniques discussed, not only conventional wastewater treatment (activated sludge) is evaluated, but also innovative treatment technologies such as membrane reactors and advanced oxidation processes.
Finally, the fifth chapter summarizes the current state of the art in the field and outline future trends and research needs. Overall the present book is certainly timely since the interest and the developments on the analysis, fate and removal of pharmaceuticals in the environment have grown considerably during the last few years. This book will be of interest for a broader audience of analytical chemists and environmental scientists already working in the field of pharmaceuticals in the water cycle or newcomers who want to learn more about this emerging contamination problem Finally, we would like to thank all the contributing authors of this book for their time and efforts in preparing their chapters. Without their cooperation and engagement this volume would certainly not have been possible.

Pharmaceuticals in the environment: sources and their management

An issue that began to receive more attention by environmental scientists in the late 1990s was the conveyance of pharmaceuticals to the environment by way of their use in human and veterinary medical practices and personal care. Pharmaceuticals and personal care products (PPCPs) comprise a remarkably diverse array of thousands of unique chemical substances, most of which are purchased for use directly by, or for, consumers and medical and agricultural practices. Of the so-called ‘‘emerging’’ pollutants, PPCPs perhaps serve as the prototypical examples because they amply illustrate the many dimensions and new questions associated with non-regulated pollutants. Of the many aspects that set them apart from conventional pollutants, a defining one is their diffuse, dispersed origins from the combined and varied actions, behaviors, and activities of multitudes of individuals. At the same time, many of these compounds experience significant parallel uses in agriculture. As consumer items, the minuscule contributions from each individual, while meaningless by themselves, combine to yield measurable environmental residues. Although, pollutants from dispersed sources and origins are not fully amenable to engineered solutions for controlling their entry to the environment, the potential for significant reductions.
Of the many aspects of PPCPs as environmental contaminants, this chapter focuses only on two—sources and their management. Numerous sources and pathways serve to convey PPCPs to the environment after their use by humans and in animals. Some have origins from both natural and anthropogenic sources. After all, the design of many synthetic drugs was patterned or inspired from naturally occurring substances that possess extraordinary pharmacologic activity. Careful consideration of these sources can help guide the development of strategies for reducing or minimizing the introduction of PPCPs to the environment. These strategies include a wide spectrum of possibilities that span drug design, commercial distribution, end usage, disposal, and treatment for waste and drinking water. The last-mentioned approach—treatment technologies—is the subject of other chapters. This chapter’s focus is on the pollution prevention aspects of environmental stewardship; for a general discussion of the principals of environmental stewardship, see EPA.