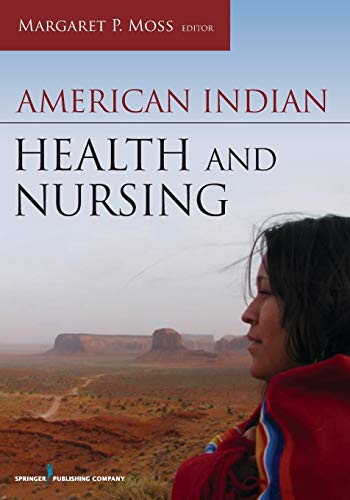 The book American Indian Health and Nursing is written by Margaret P. Moss. When I conceived this book, I was both a nurse and an enrolled member of the Three Affiliated Tribes of North Dakota, the Mandan, Hidatsa, and Arikara Nation on the Fort Berthold reservation. I have been a nurse for over 25 years. And although I was born in Fargo, North Dakota, I have lived all over the country, mostly in urban areas. During that time, I experienced nursing firsthand both in the Indian Territory and in metropolitan areas with large American Indian populations, such as Portland, Oregon; Albuquerque, New Mexico; and Minneapolis, Minn.

I was the 13th American Indian nurse to earn a doctorate in nursing, doing so in 2000. As of 2015, there are about two dozen American Indian nurses with nursing doctorates. As a nurse and educator, I have found that there are no materials related to American Indian health and nursing. I also realized pretty quickly that regions, tribes, and cultural variations matter when breastfeeding in Indian Country. As a Plains Indian practicing at the Santa Fe Indian Hospital in the 1990s, I was struck by the huge cultural differences between this mostly Pueblo, Apache, and Navajo population. I had to learn what was culturally acceptable, relevant, and useful in the care of each of the patients in that hospital. The concepts I learned on the job, even as a Native American nurse, were never taught to me in any nursing program.

Margaret P. Moss, Ph.D., JD, RN, FAAN, is a registered member of the Three Affiliated Tribes of North Dakota: the Mandan, Hidatsa, and Arikara Nation. Dr. Moss is Assistant Dean for Diversity and Inclusion and Associate Professor at the University at Buffalo School of Nursing. Previously, she was an associate professor and coordinator of the Nursing Management, Policy, and Leadership Fellowship at the Yale University School of Nursing, and was the first director of the Yale School of Nursing’s doctor of nursing practice program. Dr. Moss received her doctorate in nursing from the University of Texas Health Science Center at Houston in 2000; his dissertation was an ethnography of aging in the Zuni tribe of New Mexico.

The first book examines the profound health disparities of American Indians through a nursing lens and how they can be remedied.
The average life expectancy of a male born on the Pine Ridge Reservation in South Dakota today is somewhere in the mid-40s, the lowest life expectancy of any person, not just in the United States but throughout the Western Hemisphere. Written by and for nurses, this is the first text to focus exclusively on American Indian health and nursing. In fact, it is probably the only nursing book that even mentions American Indian health as a distinct entity. The text addresses the profound disparities in policies, health care laws, and health outcomes that affect American Indians, and describes how these disparities, woven into the cultural, environmental, historical, and geopolitical fabric of American Indian society, are responsible for the marked lack of well-being. -to be among the American Indians.

Native American Indian nursing authors from nine unique American Indian cultures address the four domains of health—physical, mental, spiritual, and emotional—within each region to highlight the many striking disparities in opportunity for health and wellness. within Native American culture by comparison. with the culture, Äúanglo, Äù. In an era of cultural competence, these expert nursing authors raise awareness of what is perhaps the least understood minority population in the United States. The text covers the history of the American Indians with a focus on the drastic changes that occurred after contact with Europeans. Excerpts from relevant journal articles, historical reports, interviews with tribal health officials, and case studies are included. The book addresses the roots of Native American nursing, including coverage of Native knowledge and traditional approaches to health and healing. Examines current issues related to American Indian nursing, nursing education, and health care within 10 distinct American Indian cultural populations, including a crucial discussion of the health care needs of American Indians living in urban areas.